Lately I’ve been mulling over plans to publish comics electronically. Truthfully there’s more urgency than that implies, as I’ve already received pages from the artist and passed them on for coloring. What I’m thinking about is which of several other projects to start next and, more importantly, how to market an e-only work on the convention circuit.

The Motor City Comic Con in Novi was held the other weekend. I decided to go to see if there was anybody dealing with digital content yet. Also I wanted to pick up a sketch I’d commissioned from Andy Bennett, who Wendi and I had met the last time we’d made comics. Wanting that sketch (and not wanting to stiff Andy) helped me to fight off the many reasons my brain concocted for not driving an hour to subject myself to a large mass of humanity.

It’s a really good thing I had that sketch as a carrot, because it took about a half an hour to finally score a parking spot. There were secret lots accessible along the edges, lots where cars floated tightly together on waves of loose gravel. Even those self-organized spaces had no room for my little Ion. Finally I took to circling a few lanes, a climate-controlled vulture waiting for a tasty spot to open up. I’m going to leave this part of my adventure there and hope that you didn’t catch how miserably that metaphor turned out.

The process of getting into the convention baffled me, but it consisted mainly of inching slowly back and forth in the winding line. We were all handed forms to fill out in order to gain admittance. Twenty minutes later I reached the table where dull golf pencils were available for use. I could have saved precious seconds by asking the people near me if I could borrow their pens but, and I cannot stress this enough, that would have required speaking to them. I don’t know what they would have said other than variants of ‘yes’ or ‘no’, but my brain said not to take the chance. I needed to save my social risks for the convention floor.

This, by the way, is why I’ve always been a lousy salesman. I don’t want to bother or annoy people. But a convention is a marketplace, and you’ve got to put yourself out there. A lot of people are just passing you to get somewhere else, so you can’t expect them to come to you. You’ve got to draw them in. I’m not sure how well I can do that given my general levels of anxiety, but being confident in my product and lures would make it at least imaginable.

Eventually I reached a desk, and I tried to hand them my registration form. The clerk gave me an exasperated look and told me that this was the line for buying tickets. I’d need to take the ticket and the form to go trade for a wristband. It was starting to feel like a game quest. Acquire the form and the ticket, then turn them in to your contact to receive the Wristband of Ingress. Not an exciting quest, but you have to start with the boilerplate missions to get used to the controls.

After equipping my newly acquired magic item, I went to find Nichelle Nichols. I’m a big fan of the original Enterprise crew, and even as a kid watching reruns in the 1970s I knew that Lt. Uhura’s presence on the bridge was revolutionary. I wanted to go meet her and tell her how that helped shape my views on racial and gender equality, even if the writers mostly confined her to the line “Hailing frequencies are open, Captain.” Sadly, I had to put my embarrassing confession on hold; she was off at an arranged photo-op. I’d have to check back later.

There were a few other celebs on my optional mission list, but I made a beeline through their section of the convention for the artists. The server was already pretty full, and most areas of the map were experiencing some intense lagging. (Translation for non-MMORPG players: it was really crowded and hard to keep up with all the activity.) I wanted my sketch in hand before I became completely enwiggenated and had to flee.

I pulled up short when I saw Tom Savini. If you like George Romero and/or zombies you know him as an effects creator and some-time actor. He’s a nice guy and really approachable, which is important for an anxiety-riddled me. Tim and I had seen him at Drive-In Super Monster-Rama last year, so I asked Savini if he’d be attending this year as well. After confirming that we were talking about the same film festival, he said he would. We agreed it was a pretty good set of movies.

Sharing a tiny geek-out with a man whose work I admire added bonuses to my panic control. I rolled up my signed “Grindhouse” poster and stuck it in my satchel. Any creases or wrinkles would only add to the feel of the poster. Then I plunged into the thicker crowds that milled throughout the creators section of the con.

Fortunately, Andy was pretty easy to find. As usual his table was next to that of his friend and fellow-artist, Dave Aikins. Dave was nowhere to be seen, but I figured I’d catch up with him later. I picked up my sketch (Boris Karloff as Ardeth Bey) and a copy of the anthology book “lifelike” from Andy, and we caught up. The venue had changed since my last attendance, and it seemed to have resulted in better foot traffic for the independent artists. In other words, the show was going well for him. 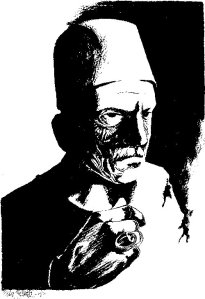 The face that launched my tiny Ion.

Remember my reason for attending the convention? Not the sketch, the other one. I wanted to gather ideas for marketing e-comics. Well, from Andy I learned that convention sketches are a big part of sales. That’s not immediately applicable, but it got me thinking that the lure of sketches could bring folks into range. Hanging around waiting for the sketch, all that reading material right before them… At worst, it would help defray the cost of the table. Plus nothing attracts customers like other customers.

Having added the sketch to my inventory, I was now free to leave at any time. This emboldened me, so I pursued a secondary objective. One of my friends from an RPG convention we used to attend had a booth at the show. Ian Ng writes “Omega Paradox”, published by Moonstone, and he was here with artist Mark Sparacio. They had four issues with them (well, three — it’s complicated) and assorted posters of Mark’s artwork. After introductions and brief reminiscing, Ian and I talked about the business while Mark critiqued an art portfolio.

Ian stressed the importance of the posters for bringing customers in for the pitch. I filed this away with sketches as another useful lure, but I was after ideas for what came next — showing off non-physical content to best effect. The importance of having a book came up. It tangibly demonstrates a body of work and is easier to shelf than a magazine. I reflected on Andy’s suggestion of print-on-demand, an option I’d hoped to avoid. It might be a nice (albeit low-profit) additional offering to my mainly online business model, and it would provide something to show and sell at conventions.

By this time, Nichelle Nichols was supposed to be back from the photo-op, so I wandered back to the celebrity booths. Happily, she was in fact there. I’m not noted for being quiet, but she had trouble hearing me over the general noise of the convention. I settled for getting an autograph, and spared us both the embarrassment of shouting my admiration over the din.

I have nothing witty to say. Nichelle Nichols is awesome.

By now, my protection was beginning to fade. I decided to see if Dave Aikins had made it back to his table. He had, but there was a small crowd around him. Dave is almost custom-made for young parents, a growing part of comic con culture. As parents they like his work with Nickelodeon properties such as SpongeBob Squareparts, but as young adults they like his gruesome zombie art. He’s kind of like Frosted Mini-Wheats. Or a serial killer.

I didn’t want to intrude on business just to say howdy, so I circled the creator tables looking at artwork and displays until Dave’s customers thinned out. While taking everything in, I caught sight of a cool poster. It took the tired kitten-on-a-branch “Hang in there” concept and turned it into a gorgeous drawing. A mixture of sketch-like reality and precise abstraction, the piece caught my eye and reeled me in to the artist’s table.

Her name is Sara Richard, and her portfolio showed a wide range of skillfully evoked moods. She said it was her first time at the show and that it was going well for her. I compared notes about my previous life behind the guest tables, and I was glad to hear how much better it was for a newcomer now. Finally I settled on a print of two foxes that had a nice sense of attachment and longing about it. As she put it into a protective sheet for me, Sara revealed that it had been drawn for her boyfriend and the foxes represented the two of them. Art really does speak beyond the reach of words.

I wondered if I had anything that powerful to show. A lot of artists were relying on customers to be brought in by posters that prominently featured gravity-defying breasts, but Sara Richard was drawing attention for a skillful rendering of a familiar meme. It reminded me that a visual hook needn’t have anything much to do with my actual product. Cultural recognition can serve as a bridge to your own work.

The throng around Dave Aikins had cleared by then, so I hastened back to his table. He confirmed the general sense of it being a good convention and joined Andy in urging me to start exhibiting again. As Andy put it, “The world needs more comics.” As Dave starting loudly insulting comics (“Yeah, you heard me! Comics suck!”), I knew I’d have to find a way back behind an exhibitor table.

I don’t know yet when that will happen, or how I’ll display what wares, but I know this much: I’ll feel a lot better with a table between me and that crowd.