SCENE: Howard sits in a small dark room, staring at the wall. His mother comes and stands in the doorway.

Mother Fresh out, I fear. We still have a cured ham, though.

Howard Apes taunt us with their twisted reflection of humanity, resembling our superior form in only the crudest fashion to insinuate that we ourselves are no more than animals, as though the bestial parody of our semblance were enough in itself to drag us down into their soulless mire.

END_OF_DOCUMENT_TOKEN_TO_BE_REPLACED

September brought me to 300 movies logged in Letterboxd. I need to watch just over 20 each month now to make my goal, so it’s time to take my challenge semi-seriously again.

Lots of re-watches last month, and two of them I watched twice in the period! “The Visitor” and “Godzilla” were new acquisitions that I watched again during the monthly marathon with friends. (I brought “The Visitor” and Tim brought “Godzilla”.) Some re-watches were for fun (“X-Men Origins: Wolverine”, “Destroy All Monsters”), some to enjoy for the first time in HD (“All That Jazz”), and one by total mistake (“House at the End of the Street”, which I had apparently erased all memory of having seen).

The biggest surprise for me was “Aguirre: The Wrath of God”. A German film by Werner Herzog, it is set and filmed entirely in the Amazon. Just imagine wearing conquistador armor for a lengthy and arduous jungle shoot. No wonder everyone wanted to kill Klaus Kinski by the end of it.

The result is magnificent, though. The visuals are gorgeous, with the camera taking in all of the lush scenery. The story of renegade explorers seeking glory and riches is solid, and the sense of both the decay of morale and the folly of the endeavor grows with every scene. Most critically, Kinski is at his egomaniacal best as the deluded ringleader of the rebellion. It is a joy to watch him deny reality as it sinks in for those around him.

Another treat was Alejendro Jodorowski’s fictional auto-biography “The Dance of Reality”. Although starting with a basis in truth, the film places more weight on emotional and symbolic truth. Because his mother had wanted to be an opera singer, he casts an opera singer to portray her, delivering all of her dialog in operatic style. By the time his father (played by his own son!) runs off to become an assassin, you suspect that perhaps the film has veered wildly from historical accuracy. Indeed, Jodorowski admits in an interview that he wanted to give his father a chance for a spiritual awakening that he never had in life.

It’s a beautiful film, as confounding and captivating as his best. It made me wonder what adventures my own abusive father could have had to become a happy and fulfilled person, who no longer had to punish those around him for his inner turmoil. I’m betting it wouldn’t involve grooming the President’s horse, but I can’t be certain.

My comic Furry Widdle Bunny launched today! I’ve been building up to this for a while, and it feels pretty gosh-dang good to finally throw it up on the web for all to see! 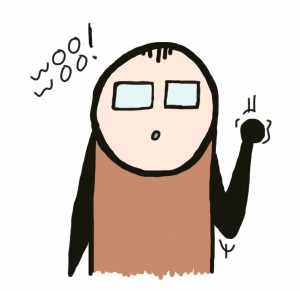 The artist toots his horn.

Anyway, I’ve been tooting my own horn all day over it, chiefly so I don’t think about all of the work ahead of me. There are enough strips in the queue to get through November, and I’d like to keep a roughly 2-month stockpile to ensure that I keep this going!