I wrote last time about the 2nd annual April Ghouls Drive-In Monster-Rama, and many readers (1) expressed amazement that I wrote about a movie event without talking about the movies! This wasn’t so much an oversight as a choice to allow that post to flow a little better, focussing on how we exhibited Garamon-like indifference to the slings and arrows of probably predictable annoyances.

Now I’d like to go over the 7 movies I watched, as well as why I bailed on the 8th.

Night One: A’Slashing We Will Go 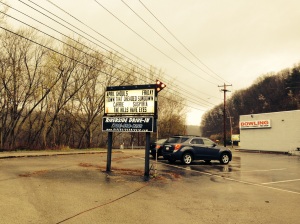 THE TOWN THAT DREADED SUNDOWN

I’d been looking forward to this one, if only because of the so-bad-it’s-great title. After the event I found out that this had been projected with the new digital equipment that basically allowed the Riverside to stay open. That’s the only positive thing that can be said about this awful, dull film.

An inexcusable amount of screen time is dedicated to the antics do Deputy Doofus, who we all suspected of being the director or at least a close relative. I could look it up, but frankly I want to forget everything I already know about this piece of wasted celluloid.

The other good thing I can say about “The a Town That a Dreaded Sundown” is that it made “Carrie” look even better. Also helping were the vibrant colors of this second (and final) digital print of the show.

It’s a movie that’s a potpourri of camp and horror. It shouldn’t work at all, but De Palma largely manages to keep the fragile balance. I always liked this one, but seeing it at the drive-in was spectacular.

This is the one that I’d expected to be amazed by. I adore “Suspiria”, and I have to say that the print looked nearly as spectacular as I’d hoped. Sadly, this was the US theatrical cut, which makes even less sense than the original. It is a very dreamlike film, so to a great extent logic is contra-indicated. Still, the gaps were noticeable and distracting.

As fans of the movie, Jessica and I did enjoy even this version, while Scott and Josh tried to get the van started behind us.

THE HILLS HAVE EYES

Flawed as it is (marred by clumsy dialog, sporadic acting ability, and the clearly low budget) it’s one hell of an effective movie. It’s early enough in Wes Craven’s career that there’s an edginess to the effort. Because the production is so course, you’re not entirely sure that Craven won’t kill off the whole family. At the same time, he’s experienced enough by this point to minimize the sort of distracting comedy “relief” that all but destroyed “The Last House on the Left”.

It was a terrific way to end the first night!

Night Two: Your Son Is a Cicada 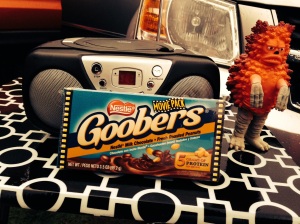 Rob joined us for Saturday, bringing an Avengers beach towel that we all admired. He had joined us on previous excursions (both to the drive-in and to B-Fest) and is always a welcome addition.

In many ways, “Halloween” is the American slasher film. There’s little I can say except that even with the faded and beat up print we saw it was terrific.

I’d seen this once when the Midnight Movies MGM DVDs first came out, and I hadn’t cared much for it. Lots of standard puberty horror saddled with increasingly bizarre inheritance horror. It all culminates in an inexplicable transformation into a killer cicada rapist.

It was still offensive and stupid on this viewing, but it was great seeing my friends have to deal with it.

Interestingly the third movie was once again essentially a fever dream on film. I’ve seen “Phantasm” several times now, and every time it grows on me a little more. It’s just so damned surreal. If I had to nominate American films that evoke the feel of Italian horror, this would probably top the list.

For me, this was a great ending to the film festival.

I hate this goddamn movie. The only way I was going to subject myself to it again willingly was if I had friends to suffer with me. Josh went to bed, Jessica and Scott retreated to the warmth of the van, and Rob had disappeared. I sincerely hope he hasn’t turned into a cicada.

I went back to my hotel and dreamt of coming back for Bava night in the fall.

7 thoughts on “So How Were the Movies?”