Last week we said goodbye to Ling, who survived far longer than expected on an emergency diet supplemented by baby food. When we first got her, in the late 1990s, we were living in a townhouse. She was our third cat, and she loved Toupee (1st) and feared Austen (2nd).

It took me a long time to accept her, probably because loving her would force me to confront Austen’s bullying behavior. In fact, when Austen died I actually resented Ling for suddenly thriving.

Ling was always weird, even by cat standards. She liked to drink from the bathtub while we were preparing to shower, and she would constantly prowl the kitchen counters and sink for scraps of food. She once stole a sandwich from one our friends. She’s our only cat who managed to eat from the fish tank. She would come down my shoulder from the back of my chair, stick her rear end in my face, then loop around to do it again.

Grace was not Ling’s strong suit. She would hurl herself bodily at ledges, always nailing herself in the chest, then scramble up.

She was never afraid of company. While the others would hide upstairs, Ling would happily move from lap to lap soaking up warmth and attention.

When she was young, she dashed through a slightly open door to chase a stray. Then she freaked out and wedged herself into a car engine. 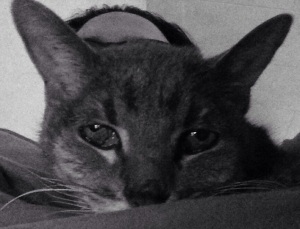 Last look at a loving friend.

On Monday night she took the final step in her long decline. She would be on her way somewhere and just stop to lie down. We tried to make her comfortable and hoped she’d rebound yet again, but by morning it was clear that she was not going to come out of it.

We decided that we couldn’t leave her alone. It was time to let her rest. Wendi stayed home with her and made the appointment. I failed her for the final time and went to work (only because of a meeting). Never one to do the expected, Ling died a few hours before she could go to the vet’s. I got the news right before that damned meeting. It was everything I could manage to get through that meeting without lashing out in grief.

My final memory of Ling is petting her before I left. She had crouched on a mat in the kitchen, unable to complete whatever cat mission she’d been on. Just inches away, Dmitri and Fischer wrestled. Barely two months old, they had just gained command of all their limbs and spent every waking moment in energetic play.

I could wrap this up with any number of pithy observations on that moment, but I really don’t want to spoil it. I’m just glad that for the next few decades we’ll have cats who knew Ling, however briefly.