It’s been a long summer. Extra hours at work… Well, that’s it, really. I haven’t had much time for anything else.

That’s not exactly true. I just haven’t done much else, even when I had the time.

At first I wondered if I was falling into another down phase. After all, one of the symptoms is a lack of enthusiasm for doing anything much. Also, I’ve been more irritable — another typical indication of a downward trend.

The weird thing is that I’ve been largely functional. I wash dishes, run laundry through their machines, keep up with taking care of the cats: all sorts of activity. But then I just sit, not doing much else.

I’m not sure what to make of it. It could be just a minor low, enough to keep me from writing but leave me otherwise okay. Or it may just indicate that I’ve made more chores so routine that they’re unaffected by my normal lack of motivation. Also possible is that this is situational, brought on by overwork, and not subject to my usual patterns of behavior.

What’s indisputable is that it’s been months since I’ve produced anything but these blog entries, and that’s been touch-and-go.

I don’t mean to complain, and I hope it doesn’t seem that I am. My intent is simply to reflect on my recent lethargy as I begin the climb back to productivity. I have a lot to do: finish an advice column, write a short story, finish one comic script and write two more — and those are just the tasks I feel obligated to do! I won’t have a lot of time for retrospection once I get going, so I’m doing it now.

And what I’ve decided is that I need to make writing an automatic task, like feeding the cats. Or writing a post for this blog (nearly) every week!

After a long, stupid summer of “Who gets to say the ‘N’ word?” I just have one question: why in the hell would you even want to? It’s not as though it lends the speaker an air of sophistication. As my mother-in-law would say, “You know better words than that.”

Moreover, it’s not as simple as merely avoiding a word — it’s a mindset that is exposed by the context in which the word is placed (despite the protestations that such remarks are taken out of context).

I once attended a disastrous “over the hill” birthday party for an unmedicated depressive. After the guest of honor locked herself in her bedroom, Wendi and I were left stranded amid a group of people who should damn well have known better than to laugh at her mortality.

We awkwardly ate our pieces of the “funny” cake, all flavor buried beneath the horrible taste of every food coloring ever made (used to produce a jolly black icing to the cake). Then it got worse.

There are some misguided individuals (myself, sadly, included) who combat their own discomfort by inflicting their poor wit on those nearby. Granting that there were only a handful of guests, I still have no idea why we were selected to receive his joke. Maybe he thought that the liberal college students could use some casual racism.

Playing off the unfortunate side-effect of the death cake — which had dyed our teeth and tongues a sickly, dark indigo — he sidled over to us, a twinkle in his eye, and quipped “You look like reverse n_____s!”

Now, here’s my point. The problem isn’t just the word. “You look like reverse African-Americans!” is still a stupid thing to say, and neither phrasing is remotely funny. (Okay, I’ll grant that the revision might be droll in some post-ironic way.) There are much funnier ways of observing that the damn cake was staining us:

What I think this reveals is just how much this person is consumed by racial differences. It’s the very first thing on his mind. See a white guy with black teeth? Hey, that’s the opposite of a black guy with white teeth! And that preoccupation undoubtedly carries into other topics. Crime? Race! Jobs? Race! TV? Race! Cake? Race!

So — if you’re upset that you don’t get to say that special word — ask yourself what kind of asshole you are that you want to say it.

When we came back from the disastrous vet appointment, the rescue cats were quarantined in our enclosed porch. We had scheduled a second try at blood work and shots and had only four weeks to convert the kittens to a semblance of domestication. Wendi announced that it was time to put them through Kitten Boot Camp.

Assuming the mantle of drill sergeant, she started to put them through their paces. Within a week, she had them literally eating out of her hand, and she could pet them a little while they ate. It seemed as though every day brought new progress.

My efforts as emergency back-up substitute sergeant were not as effective. The mother cat was fine with me, but the kittens have identified me as a gigantic, lumbering threat. I did stick my finger (covered in chicken baby food) in their hidey-hole and got the girl kitten to show her head. Now she runs away from me but is sure to stay within sight — you know, because chicken.

(What is it about chicken that cats crave so much? Did their ancestors hunt wild chickens along the banks of the Nile? Now that I think about it, where did chickens even come from? I bet Erich von Daniken never thought about that angle.)

The weirdest part of the whole process was that our own cats all started to climb into bed with us at night. At first we thought they were just feeling jealous and needy. After all, Wendi was spending a lot of time with the rescue cats. Then we noticed that they were spending their weekdays upstairs as well. Were they that offended by the newcomers that they didn’t even want to be downstairs?

That didn’t seem right. They had no hesitation about joining us in the living room; they just wanted nothing to do with the first floor unless we were there. We just had no idea why.

After a while, Wendi decided that the rescue cats had gotten used to human voices. We had set a clock radio by the door — set to NPR — and had been turning it on when we went to bed or left for work. Now we felt that it was okay to stop doing that.

The day after we stopped turning on the radio, our cats were back to their normal routine of lounging around downstairs. 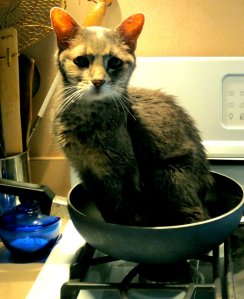 …I guess I should just order a pizza.

About six weeks ago, Wendi noticed that a cat hanging around our house was living under our deck with two kittens. We might have noticed sooner (or she may have chosen someplace else) if our deck weren’t a rickety death-trap that urged disuse. Whoever built the horrid thing had less understanding of carpentry than I do, and I am not to be trusted with so complex a tool as a hammer.

Anyway, Operation Rescue the Kitties went into effect. Wendi began spending time working on trying to gain the trust of the mother cat and her young. The mother proved simple; as soon as she started getting kibble, she revealed herself to be abandoned rather than feral. It wasn’t long before she started trying to follow Wendi inside the house.

The kittens were another matter entirely. Barely a month old, they were already well-versed in the arts of running away and hiding. Wendi gradually won them over to the extent that they would play with a string toy, but they still ran whenever she moved. 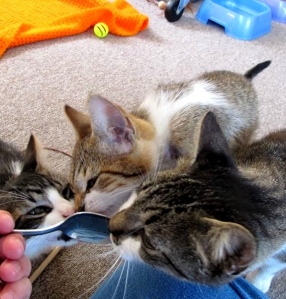 The road to domestication is paved with food.

Still, we needed to move them inside where they’d be safe, and to do that we needed to get them checked out for contagions. We don’t want to lose our three furry lunatics to a communicable disease brought in from outside!

Wendi cashed in their trust to get the strays into pet taxis, and we took them to our vet for inspection. The mother went first, and she did pretty well but not enough to get a blood draw. Next up was the male kitten.

No sooner did he get out of the taxi than he launched into a realistic impression of Warner Bros. Tasmanian Devil. He ran in all of the directions at once, and by the time we contained him he had drawn some of our blood.

The results of this test were officially recorded as “inconclusive”.